Who is right/wrong here?

Who is right/wrong here?

A woman who asked her husband's parents to look after their children while she went to hospital for a medical emergency has revealed she was left furious after they refused because they had plans to go to the pub.

Posting anonymously on Mumsnet, the British woman explained her in-laws said they would only look after her children if they were unable to find someone else, because they already had plans.

She went on to say they texted to apologise for not being more willing to help, adding that while her husband has forgiven them, she's still 'absolutely livid' and doesn't care about them anymore. 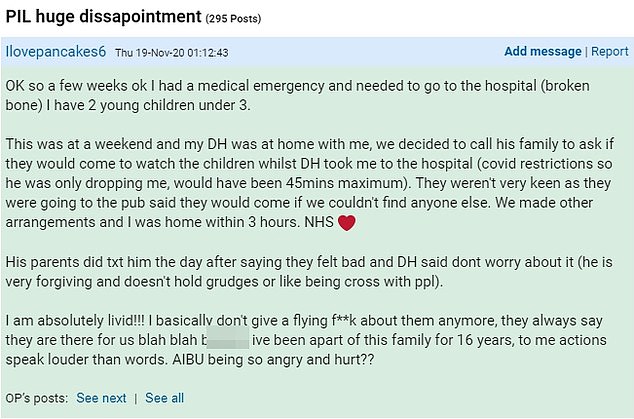 IMO i believe the husbands parents are slightly in the wrong - especially as it was an emergency and they are the grandparents, im sure they could of maybe rescheduled what they were doing? But on the same hand this couple must have other people they could of asked? It would be different if it wasn't an emergency, you can't expect people to look after your kids just willy nilly but she did have a good reason here.
The Drive Thru - https://thedrivethru.boards.net/
Top

She's a bit OTT though

On the face of it, it looks bad for the husband's parents... however, I'd also like to hear their side of the story. I feel like I can't really make an informed decision until I've heard both sides of this.
Top

'This was at a weekend and my DH was at home with me, we decided to call his family to ask if they would come to watch the children whilst DH took me to the hospital (covid restrictions so he was only dropping me, would have been 45mins maximum).

Here's a thought. Seeing as your DH was home with you, and was after all only dropping you off, the kids could have come along as well.
Spice's Coffee House
“Where you used to be, there is a hole in the world, which I find myself constantly walking around in the daytime, and falling in at night. I miss you like hell.” – Edna St Vincent Millay
Top
Post Reply
6 posts • Page 1 of 1